Covered Soap Dish, and Shaving Mug
by Steve and Karen Stone
The first use of the name “Rose and Fish Scale” applied to this embossed design was by Mary Joseph and Edith Harbin in their 1973 book Blue and White Pottery; the small mouth ewer is illustrated on plate 6, row 3, #1.
The Rose and Fish Scale embossed design consists of a 13 piece wash room set. It was created and produced by the A.E. Hull Pottery Company, Crooksville, Ohio from 1905 to 1935. In the A.E. Hull product catalogs of that time this set was labeled only as “Embossed Wash Set.”
Various pieces of this set are commonly found today, such as the brush vase (5" tall), chamber pot and slop jar (sometimes with their lids), hot and cold water ewers, and wash basin. Other pieces, such as the shaving mug (3 3/4" tall) and covered 3 piece soap dish (2" tall, 5" diameter) are difficult to find and could be considered “Once in a Lifetime” pieces to find.

The Blue and White Flying/Lovebird line of embossed stoneware was made by A.E. Hull Pottery Company, Crooksville, Ohio, in the early 1900's. The line included many different pieces all focused on kitchen and table ware, to include small berry bowls.
While many pieces of blue and white stoneware were frequently embellished with under glaze advertising, Flying Bird advertising pieces are exceedingly difficult to find.
A Flying Bird berry bowl with advertising in the bottom is illustrated by Edith Harbin 1977, Blue & White Stoneware Pottery Crockery: Identification and Value Guide, page 18(19), row 1, #3. The advertising reads “Yours Truly Pork And Beans.” The photograph accompanying this article is of a different Flying Bird berry bowl with the same advertising. A quick internet search yields advertisements for Yours Truly Pork And Beans, 1910.

by Steve and Karen Stone

This amazing decorated whiskey shoulder jug is fresh from a central Indiana estate. It stands 8-3/4 inches tall with a diameter of 5-1/2 inches at the base. It is bottom signed “FRANK ROW(E?).” The stamped underglaze blue decoration is bright and vibrant; there are no smears, smudges or streaks. There is just a suggestion of very light sporadic glaze crazing. We've examined the various decorations on this jug. We have a number of salt and butter crocks, canisters and spices that, collectively, present all these stamps. While not one of our pieces boasts all these stamps, taken as a group our pieces do present all these jug decorations. These salts and butters, canisters and spices (and undecorated shoulder whiskey jugs) are well documented as items for sale in A.E. Hull Pottery Company product catalogs from the early 1900s. As such, this jug is most likely an early 1900s lunch hour or Friday afternoon piece individually fashioned by an employee at A.E. Hull Pottery. Considering this jug is signed, quite possibly it's a presentation piece and unquestionably one-of-a-kind.

As aficionados of blue and white stoneware, for this jug to survive for more than a century, and without damage of any kind (no chips, no flakes, no lines or cracks - it is as made from the pottery), enriches all our lives. Really nice pieces are still out there and who knows what just may pop up with continued searching.
​. 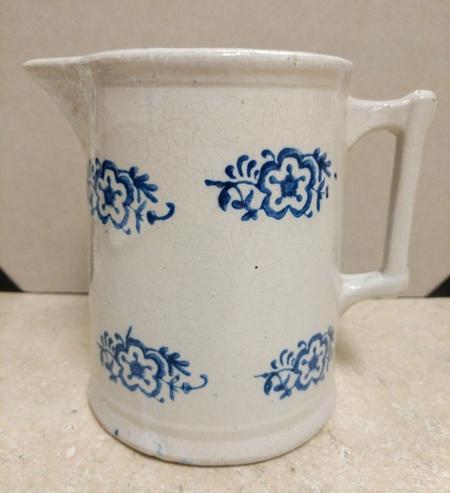 A Free Wheeling Decorated Nautilus Pitcher
by Steve and Karen Stone
with thanks to Duane “Doc’s Crocks” Watson
Every so often a marvelous and truly unique piece of blue and white stoneware will pop up, and here one is.  This pitcher is unquestionably a Friday afternoon or lunch hour piece. A potter whose identity will unfortunately never be known took a lot of time planning this piece then executing that plan.
In his 1986 book “Stoneware in the Blue and White,” M. H. Alexander was the first to illustrate a pitcher with a design he named “Nautilus.” He explained the inspiration for the name was “... a design resembling, in part, a nautilus shell.”
An early 1900's Pfaltzgraff Pottery Company product catalog illustrates a pitcher with the decoration that H.M. Alexander later referred to as “ Nautilus,” the pitcher in the catalog was not named.
Also in the early 1900's a pitcher with the same Nautilus design appears in an A.E. Hull Pottery Company product catalog. This catalog pitcher bears no name either. However, this Free Wheeling Decorated Nautilus pitcher is also liberally decorated with controlled sponging and vertical diamond stamps.  So, it is reasonable to assume this highly decorated Nautilus pitcher is considered an early 1900's product of an imaginative and unknown potter at the Pfaltzgraff Pottery Company or A.E. Hull Pottery Company.
This Nautilus pitcher is a classically molded three piece pitcher, two sides with applied handle. It stands 7-3/4 inches tall and has a really tiny pinched spout. The bottom is unmarked. This pitcher has a stamped vertical diamond decoration up both sides and the Nautilus stamp vertically up the front under the spout (to date this pitcher is the only known piece with the Nautilus stamp applied vertically). Additionally, controlled sponge decoration is liberally applied to the pitcher’s body, handle, and on the inside top rim down about an inch.  The stamped vertical diamond geometric pattern on this pitcher is found, in its horizontal application, on several sizes of blue and white stoneware butter crocks and on at least one other Friday afternoon pitcher (also displaying the vertical diamond stamp) which also has the Nautilus stamp.

Rare A. E. Hull pitcher, love birds on obverse with eagle on reverse. 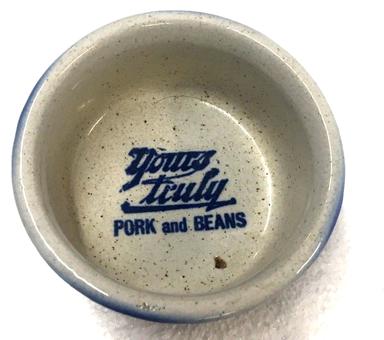 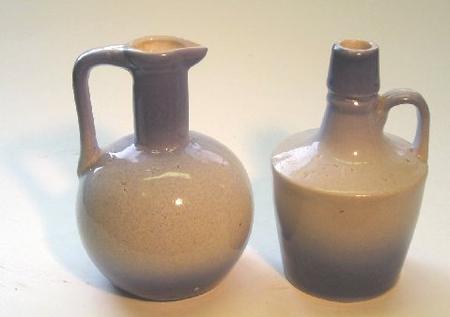 The company's success continued and, over the next several years, the business expanded. In the 1920s, the A.E. Hull Pottery Company maintained its general offices and factories in Crooksville and had an office and a showroom located in New York, offices in Chicago and Detroit and a large warehouse in New Jersey. It was also during the 1920s that Hull began expanding the variety of his company's product line to art pottery. The company also began using a broader variety of colors and glazing techniques with its products.

A.E. Hull died in 1930. Addis E. Hull, Jr. succeeded his father in the management of the business. Hull, Jr. left the company in 1937 to become the General Manager of the Shawnee Pottery company. Gerald F. Watts became the new manager of Hull Pottery. Also in 1937, the company contracted with Shulton Inc. for the containers of its Old Spice product line and to manufacture other  pottery cosmetic containers. By the late 1930s through 1950s, Hull was making some its best work. By far the most popular line to come from the factory was "Red Riding Hood", produced in 1943. Hull developed art pottery lines primarily along floral themes: Orchid, Magnolia, Calla Lily, Rose and Tulip to name a few. The trendy pastel matte lines of Hull Pottery were in high demand. Hull's product line had expanded to include piggy banks, liquor bottles, and lamps. The company's Floristware line was one of Hull Pottery's most successful lines. From the 1940s through the 1960s, a plant or flower bouquet delivered from a florist was often contained in a Hull pot or figural planter.

Numerous collectors clubs exist which specialize in collecting Hull Pottery. One such organization, "The Hull Pottery Association" is headquartered in Crooksville, Ohio. This association's goal is to "preserve, educate, and promote Hull Pottery, its collectors, and its heritage."