by Steve and Karen Stone

Vase on the right is 10-1/2" tall, middle is 10" tall, left is 9-1/2" tall.
Here’s the back story for these beauties! For a few years prior to the 2006 B&W convention suggestions were fielded from club officers what the next commemorative should be. The Dutch Scene was nominated and approved for canisters and spices. For the following few years this was the decoration for convention commemoratives ... canisters and spices.
For the 2006 convention banquet table decorations a final run of Dutch Scene pieces consisting of about 12 vases with various accent decorations from mostly plain to heavily sponged, they were greeted by overwhelming approval from banquet attendees. My Mother had a fondness for sponge pieces so when banquet bidding started for the heavily sponged vase Dear Wife Karen and I had the winning bid.
Ken and Rhonda Blackburn were raffle coordinators. The vase on the left of this photo was to be raffled off at banquet; I really had the hurts for this vase. Throughout convention raffle tickets were sold at $1 each, $5 would buy 6 tickets and so on. The night of banquet I just KNEW I couldn’t live without this vase so I plunked down a hundred dollar bill and, clutching my 125 raffle tickets, merrily proceeded to our banquet table confidant that vase was going home with me, I was CERTAIN of it!
Towards the end of the banquet the appointed time arrived, the winning raffle ticket was drawn, the number announced. I was frantically reading numbers on my tickets as fast as I could, I was about half way through when, to my immediate right, I heard “Oh, it’s me!”
I turned and saw Dear Wife Karen smiling, holding her winning ticket aloft, and heading to the front of the hall to claim her prize Dutch Scene vase. Sometime during convention she had paid $5 for six tickets. I was dumbfounded and flummoxed, my jaw went slack and agape. It was no secret to attendees I paid $100 for 125 tickets. And when dear Wife Karen claimed her prize she was greeted with roaring applause! I just sat there in stunned silence. When we got home and placed the vase on a shelf I got over it (mostly).
The vase on the right, I was club newsletter editor for 11 years, 1995 through 1005; due to failing health I bowed out of that responsibility. Blue & White Pottery Club president Max Eakin knew of my fondness for the Dutch Scene vases. Sometime after that convention I received a package from Max and Linda Eakin. I opened it and this exquisite vase was safely nestled in packing. A wonderfully decorated Dutch Scene vase personally inscribed “Steve Stone/Newsletter Editor.” It was wonderfully received and very much appreciated! I was truly honored!

Here’s the postscriptum: At the next convention, 2007, at the banquet (many of the banquet attendees had attended the previous 2006 convention banquet), just as raffle managers Ken and Rhonda started pulling winning tickets, Ken announced that Steve Stone had won the (albeit somewhat dubious) honorary title of “Person Buying the Most Raffle Tickets and Not Winning Anything”. Roaring laughter and good times had by all!!

Shaving Mug, and Covered Soap Dish
by Steve and Karen Stone
A variety of stoneware pieces decorated in various kinds of blue and white spongeware can easily be found in many shops, malls, on-line sales, and auctions. Frequently found are the spongeware pitchers and bowls of various sizes that occupy a lot of shelf space.
Spongeware items were produced by most every pottery operating in North America from about the mid 1800's to the early middle 20th century; some potteries still produce it to this day. Such newer pieces are easily distinguished from collectible 100 +/- year old pieces.
Pieces were designed and produced to fill almost every conceivable human and agrarian need. For the most part spongeware was the potteries bread and butter, it was in demand, cheap to produce, and churned out as fast as possible. Unfortunately, most pieces were unmarked as to which pottery produced it. Ascribing which potteries produced which pieces is virtually impossible due to the lack of any identifying marks. And reviewing pottery company product catalogs is not much help either because almost every pottery used the same shape, form, and sponging decoration. Although there were different sponging patterns, singular sponging patterns are almost always not carried forward and described in product catalogs.
There are exceptions, of course, many potteries decorated their wares with a combination of sponging and solid banding encircling the piece. The uniquely shaped Uhl sponge pitchers are diagnostic to that pottery. Inspection of the clay color and the glaze is most helpful identifying pieces manufactured by a pottery operating somewhere in the Great Ohio Valley clay beds. Some potteries offered 5, 12, or 13 piece spongeware toilet sets and many of those pieces are to be found today with a bit of dedicated searching if accumulating a complete set is the desired goal.
A collection of the banded wash set of shaving mug (3-1/2" tall), brush vase (5" tall), and 3-piece covered soap dish (2" tall, 5-1/4" diameter) is a fairly easy way to collect a representative portion of a much larger wash room set and the three pieces do not consume a lot of shelf space. 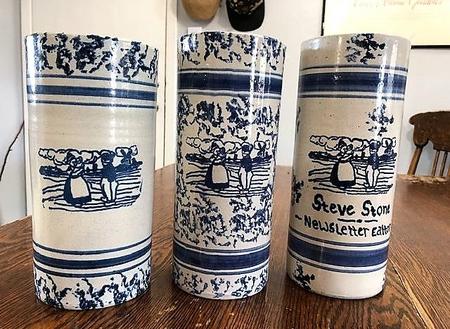 It's Fast and Simple 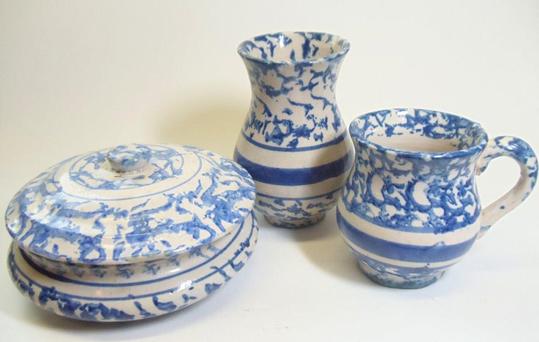 Blue and White Spongeware Presentation Pitcher
By Steve and Karen Stone
with thanks to Duane “Doc’s Crocks” Watson
Perhaps somewhere in the early 1900's this blue and white spongeware hall boy was most likely presented to a newly married couple named "Clarence” and “Mabel."
This hall boy is 6-3/4" tall and features a carefully tooled rim, rectangular handle, top and bottom cobalt stripes, with the names "Clarence” and “Mabel" on opposing sides in freehand. The sponging is neatly controlled in cobalt blue with touches of light brown. The handle sports a small flower, the bottom is unmarked.
No doubt one of a kind, this piece is most likely a product of one of the many potteries conducting business in the Great Ohio Valley with its abundant and easily mined beds of clay. Whether a potter was commissioned to produce such a magnificent piece or it is simply a lunch hour or Friday afternoon piece fashioned by a dear friend for the newly wed couple will never be known. What is known, however, that it has survived to this day and we are all very much blessed and enriched by its existence.