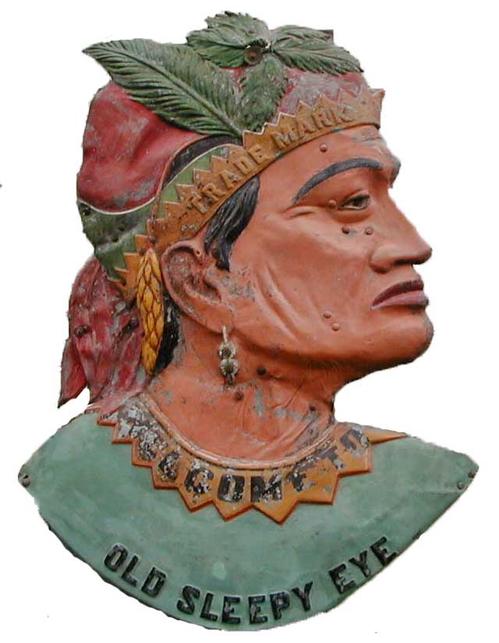 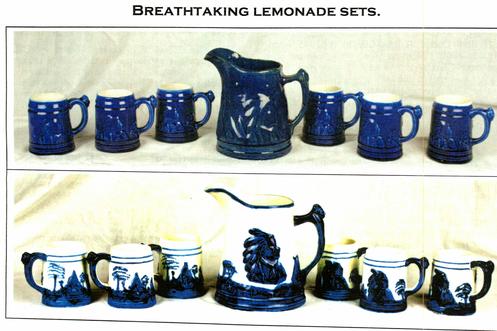 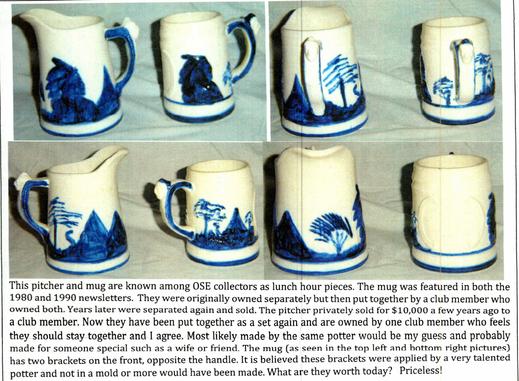 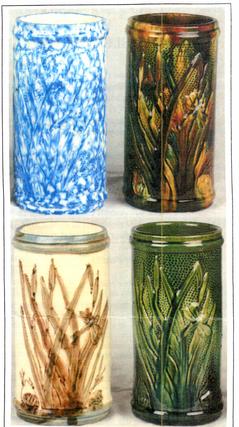 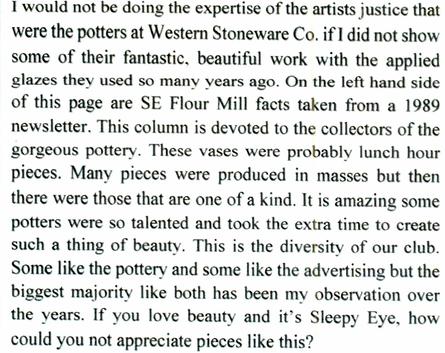 KNOW THE LOOK, FEEL, DETAILS, AND WEIGHT OF REPRODUCED PIECES. 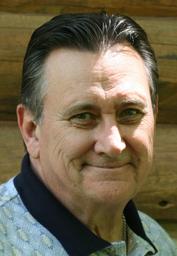 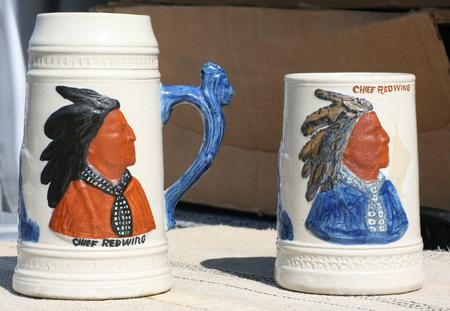 The stein above matches the teapot in color and was probably made by the same potter. The vase is the only one known to exist as well as this teapot, as it has the name "Theresa, 1904." The vase has the name Roxie & camp on it. There are only 2 other teapots and they have the word Mother on them. One looks is similar except the color of the tie is different and has holes in the spout for ventilation, and it just has Mother on it. The other one has x-mas 1904 and on the other side Mother and the spout is all blue. Referencing the Clay Giant’s book this was a lunch hour piece made by Otto Hartnagel for his mother for Christmas in 1904. Most of the steins are signed on the bottom with a number and initials G.H. According to the book Red Wing Potters & Their Wares by Gary and Bonnie Tefft George Hartnagel Jr. worked for the RWSCo. during this time period. They also state that George Hehr was a master mold maker at the time and so there is some confusion as to whom these initials stand for. It is believed only 54 steins were made. These are quite valuable pieces of pottery for us Old Sleepy Eye Collectors also! 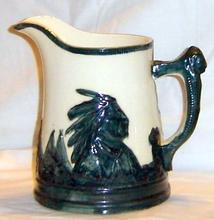 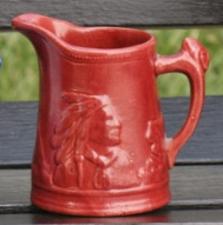 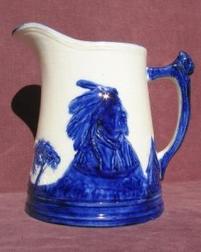 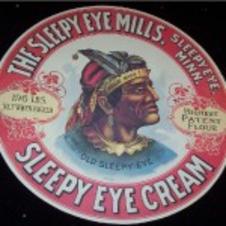 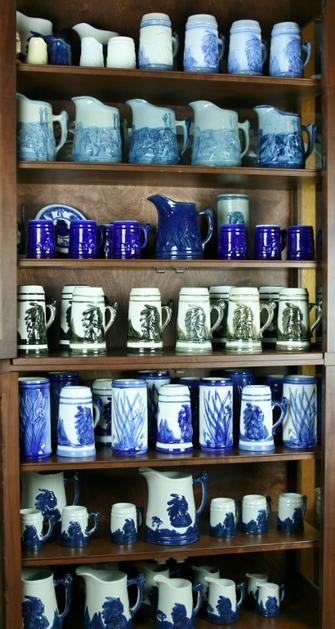 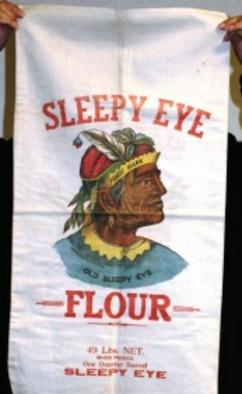 The Old Sleepy Eye Collectors Club of America was founded in 1976 to preserve the heritage of the Old Sleepy Eye Flour Mill and collectible advertising items that were created by the mill. Where it all began, Sleepy Eye, Minnesota

– Mill History
The first flour mill was built in 1883. While sources disagree on the ownership of the original mill, sources do agree that the second mill was built in 1902 under president A.C. VonHagen. The mill boasted many improvements that were considered advanced for its day. The well, which was dug in 1892, produced 20,000 gallons of water in 24 hours.  In 1901 the mill enlarged its copper shop, added more railroad tracks, INSTALLED power machinery, and built a 125 foot high elevator. In 1902 a 175-foot high chimney was built using 350,000 bricks. Also in 1901-1902 the main drive shaft was INSTALLED using 562 hides to create a 200-foot belt. Vertical belts with steps took employees floor to floor.

In 1909 the mill went into receivership while VonHagen was president. He blamed the government for the failure; others blamed him for unwise investments. The mill once owned 27 elevators in 2 states, a vacation home in the country and a launch on Sleepy Eye Lake. In 1914 much of the machinery was moved out of Sleepy Eye, the mill did reopen with offices in Minneapolis. In 1915 the original mill building was torn down. In 1917 the bondholders sold the mill to Kansas Flour Mills. In 1921 the flour mill had its final closing. The remaining mill building has had several owners since then. The current owner of the mill building, Bob Pelzel, was generous enough to invite the 2008 Sleepy Eye Convention attendees on a tour and historical information seminar at the mill building.

Chief Sleepy Eye (Ish-Tak-Ha-Ba)
Chief Sleepy Eye lived from 1780 to 1860, and was nick-named “sleepy eye” because of his heavily lidded eyes. His people made their home by Sleepy Eye Lake in 1857, which was originally called Pretty Water By The Big Trees. He was Chief from about 1825 until his death in 1860. Urged by a priest, Mr. VonHagen promoted a search for Chief Sleepy Eye’s remains, which were found in 1890 and interned beneath the monument dedicated October 17, 1902, in Sleepy Eye. The monument bears a likeness of the chief from a painting of him made in 1824. Interestingly, the mills trademark is NOT his portrait.

OSE Club History
Amid the idyllic setting of the Martin farm near Monmouth Illinois, a small group of Old Sleepy Eye collectors met in January 1976 to discuss the formation of a club. By the end of the meeting The Old Sleepy Eye Collectors Club of America, Incorporated was formed and soon after chartered as a non-profit organization. Monmouth is the home of the Western Stoneware Company, which had produced most of the Old Sleepy Eye pottery for the Sleepy Eye Milling Company.

On March 24, 1976, the newly formed OSECC published its first Newsletter, written and edited by founding member Dick Reed. Additionally on that day, the first official club membership was issued to Howard Cooper of Monmouth Illinois, followed shortly thereafter Jim and Patti Martin, and E.W. Kolbe of Sleepy Eye Minnesota. Since that humble beginning, the club has grown throughout the years, and currently the OSECC maintains several hundred members in 35 States.

Old Sleepy Eye Collector’s Lament
This song composed and sung by former member, the late Doc Nau, sums up collecting Old Sleepy Eye items:
"One day at an auction, what did my wife spy?
But a broken old pitcher, called “Old Sleepy Eye”.
She brought it home, we use it as a vase,
And now we have Old Sleepy Eye all over the place.
Sleepy Eye flour is what started it all"
And a droopy eyed Indian, about six feet tall
A town in Minnesota, an Indian by the same name
That’s when Western Pottery and Old Sleepy Eye started their fame.
​ 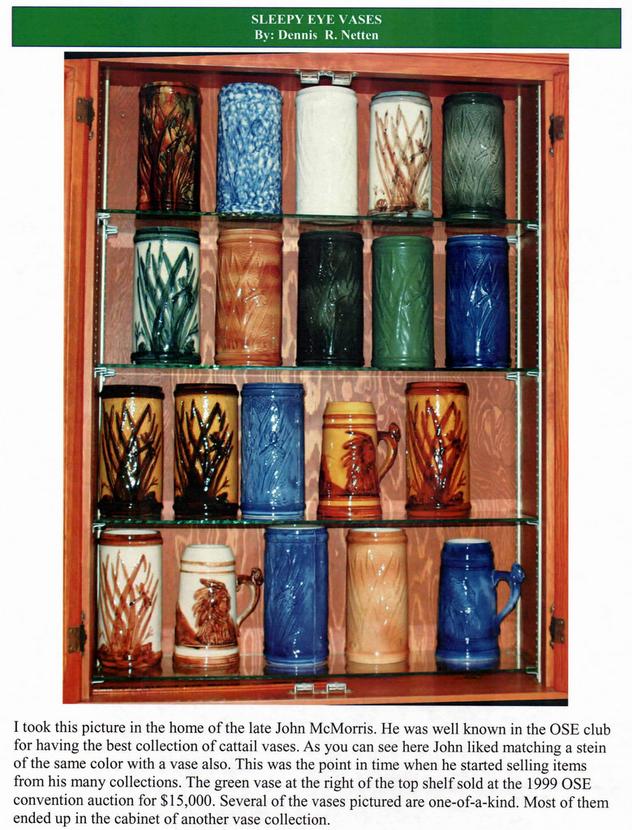 This large metal sign is one of two that were on top of the Sleepy Eye Flour Milling building when the mill was in full production. This one is the closest to still being original as the other one had been repainted in certain areas. It was out at the shooting range for a time and sadly was used as target practice causing what looks like pimples in the face. The sign was purchased by Willie Turner  from Williamsburg, KS and  donated by him to the Sleepy Eye Area Historical Society. A full capacity  “Thank You and Recognition” gathering was held at the museum during our OSE convention. If you look close at the picture you can see the sign has been put behind glass at the museum. This was done due to people visiting the museum and touching Old Sleepy Eye on the nose. This caused fear that this gesture would damage the paint on the sign over time. 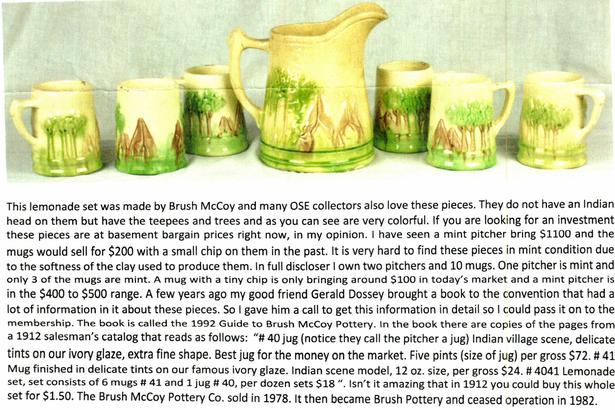