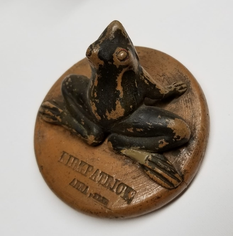 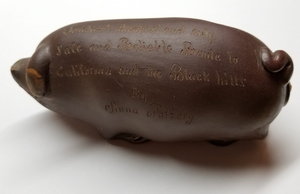 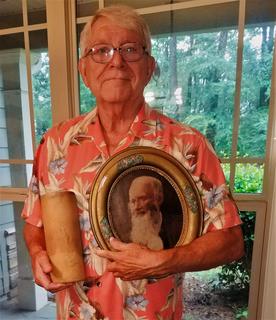 Cornwall Kirkpatrick with brother Wallace, and father Andrew Sr., relocated to Anna from Mound City in the spring of 1859 and fired their first ware in November, 1859. This was an important chapter in the hand craft of the traditional Kirkpatrick potting family, and is most eloquently conveyed by Ellen Paul Denker in her comprehensive collegiate master's thesis, "Forever Getting Up Something New." A most interesting perception about the Kirkpatricks appears in her report's introduction "As with all artifacts, the study of pottery provides innumerable insights into the patterns of lives past and present, patterns of both makers and users. The complex interpretation necessary to understand the stoneware specialty products created by the Kirkpatrick brothers reveals the rhythm of life in Illinois during the late nineteenth century. Economic conditions, social movements, the local fauna, and important local, regional, and national events are reflected in their bizarre and delightful creations. Between 1859 and 1896 the brothers Cornwall and W. Wallace Kirkpatrick built and operated a large stoneware pottery in Anna, Union County, Illinois.