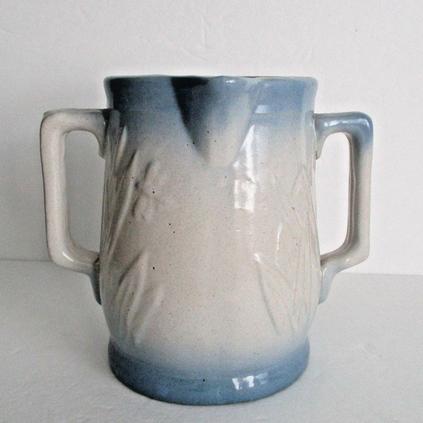 Unusual Two Handled Cattail and Dragonfly Pitcher
by Steve and Karen Stone
Here is a truly unusual and possibly unique blue and white stoneware Cattail pitcher produced at the Western/Monmouth Pottery Company, Monmouth, Illinois, in the early 1900's. It started existence as a standard 7 inch tall Cattail pitcher which should have had a handle applied on its back. However, a potter felt a need to forego the standard issue single handle on the back and preferred to apply two handles, one on each side of the piece.
What advantage two side handles had over a single handle on the back is unclear. Perhaps it was intended as a gag gift, or a shelf piece never to be functionally used but only admired, generating lively and lengthy discussions. Who knows?
At any rate we are fortunate indeed this novel piece has survived 100+ years, we are truly enriched by its existence. If the potter of this piece intended it to spark interest and bring about discussion then that effort was successful even into its second century of existence.
.

The Monmouth Pottery Company of Monmouth, Illinois began production in 1894 producing a wide range of utilitarian wares, crock jars, jugs, stoneware bowls and churns etc. Early wares were salt-glaze and Albany slip glaze with hand drawn cobalt markings, but they quickly switched to a number of stenciled and stamped markings along with switching to a bristol glaze. One of the earlier marks they used on bristol glazed crocks, butter churns and jugs was a logo of two men standing in a crock, "two men in a crock", these pieces are relatively hard to come by and don't come on the market very often.

By 1902 they were primarily using the maple leaf logo on most of their wares, crocks, jugs etc. were stamped with a maple leaf design with the words "Monmouth Pottery Co. Monmouth, Ill" in the center. During this period they were also producing advertising pieces, miniatures, stoneware pigs and cow and calves. These pieces if unsigned, as many were, can easily be confused with the examples made by the Red Wing Union Stoneware Co., a strong competitor at the time. The Monmouth Pottery Company was in operation until 1905 when it was sold, it was soon to become one of the seven plants of the Western Stoneware Co. in 1906.

The seven companies that merged together in 1906 are:

Through the years the maple leaf logo as seen a few variations and there were also several different bottom markings and various stamps that were used to mark their wares, but many pieces were unmarked. They produced many lines of stoneware and pottery, from the basic utilitarian wares as crocks, butter churns, jugs and water coolers to decorative pieces of art pottery, even pottery lamps and various flower pots and planters, basically almost anything that could be produced from clay was made by Western Stoneware.

A few of their more popular lines were the Marcrest dinnerware line, the Colonial line of stoneware and the Monmouth Pottery artware / gardenware. Western Stoneware also produced many pieces of blue & white stoneware and spongeware decorated pieces that are also highly collectible. Some of the most sought after pieces are wares with advertising on them, merchants would special order wares with their business name printed on them to give away as premiums or to put their products in. Western Stoneware would put advertising on about anything the customer wanted although bowls, jugs, beater jars and pitchers seem to be the most common. This was a very popular way of advertising and several potteries produced advertising pieces such as the Watt Pottery Co. and the Red Wing Stoneware Co.. Many of these wares were unsigned by the manufacturer and can be a little difficult to identify if you are not an avid collector.

Over the years the Western Stoneware Company has seen several changes in ownership, the most recent in 2006 after their 100 year anniversary. They continue to produce stoneware at Plant Two, the only remaining Western Stoneware factory.