The Buck Inn, north Alton, pottery operated 1868 to 1875 and was located near the intersection of Alby street and Center on the north edge of Greenwood (North Alton), bordering Godfrey, Illinois. The original Buck Inn dwelling served as a stage coach stop, post office, inn, and overnight live stock drive staging area. It was a two story brick structure erected in 1837 at the north west corner of State Street and Delmar and is now occupied by a strip mall. It became a major stop and overnight layover for live stock drives coming into Alton from distant farms. After a night's layover, live stock would be driven about a mile to the Alton river front and landing for processing and sale to the local stockyards in St. Louis, Illinoistown (East St. Louis), Cairo and other markets.
Often the inhabitants of an area referred to their post office as their residence or home. Early occupants of the Buck Inn displayed deer (buck) antlers on the front of the dwelling. Thus, a natural name for the inn was born, the "Buck" Inn . To better serve this Village a post office was established in 1868. It was kept by P.J. Melling at his house in township six, range ten. Detailed mid nineteenth century maps of Illinois depict early Alton villages including, Alton, Bozzatown, Hunterstown, Emerald, Alton Junction, Salu, and Buck Inn.. In 1870, William Hall was appointed postmaster and the post office was moved to north Alton. Then in 1875, the village of North Alton was incorporated and the name of the post office and area was then changed from Buck Inn to North Alton containing about nine hundred and fifty inhabitants.
The actual pottery was located approximately one half mile northeast of the Buck Inn. In close proximity of the Western Stoneware Company was later established the famed Alton Brick Company. One each of salt glaze, cobalt stencil marked "Western Stoneware Co./ Buck Inn, Ills," jars are known in the 2, 3, 4, gallon capacity. One marked two gallon; one marked three gallon; two marked 4 gallon; and three marked 6 gallon capacity jars are known. All jars are straight sided with rounded bolstered rims. Also, one 4 gallon straight sided shelfed jar/churn exists having a direct rim. All vessels possess smooth lug handles without finger molds with the exception of the small 2 gallon vessel that required no handles. 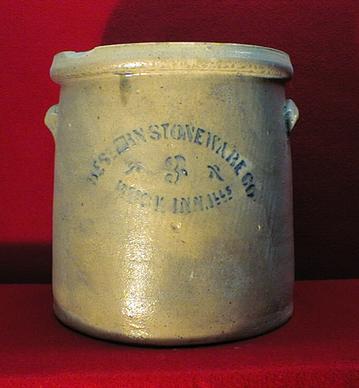 Above blue tabs give access to  powerpoint  downloads with audio.

Antone Ulrich and half brother John Wietfeld immigrated from Westphalia, Prussia, to America in the early 1830's. They arrived at Upper Alton, Illinois, in 1833 and established a farm and pottery in 1836. John Wietfeld was a master potter. Little could he imagine his great significance to his hand craft in the young village of Salu within Upper Alton, Madison County, and the state of Illinois. Closing in 1876, this traditional family pottery spanned four decades. John Wietfeld exemplified and gave meaning to the adage "master" German potter. Ulrich and Wietfeld owned three tracks of land, with one containing a tributary of Coal Branch Creek near the west edge of Wood River Township where they developed a farm and a pottery located south side of College Ave., one third mile east of Seminary St. (near the historical toll gate). This property for the most part fell into the ownership of H.A. Hastings as indicated on the Madison County Atlas of 1890. In 1850 the pottery produced 3500 gallons of redware and stoneware.

Listed in the 1850 census were Anthony Ulrich, John Wietfeld, Joseph Coleburg, Casper Gotten, Jacob Bachom, Henry D. Warnack, Sophia Hagerman, Richard Baker, and Henry Herman. In the 1860 census are listed Anton Ulrich, John Wietfeld, John Gahlert, John Vallh, Harz Becker, and Larry Burger. Moreover, some potters at Ulrich & Wietfeld moved onto to establish their own works as could be expected. Utilitarian salt glazed stoneware was predominantly manufactured bearing a capacity stamp within a dentated circle. Early Ulrich-Wietfeld specimens display an ovoid shape usually in the 2 gallon capacity, and are not two-toned. Other examples, likewise hand turned, bear more standardization ranging in size from 2 gallons to 6 gallons and are usually necked jars, or shelfed/jar churns, possessing everted rims. These often have about a two inch albany slip dipping from the top of the lip giving their salt glazed stoneware a distinctive appearance. This dipping served the practical purpose of better sealing the top of the item, thus preserving contents from the porous stoneware. Ulrich & Wietfeld advertised in the "Gazetteer of Madison County"(Hair 1866:XIX). Products of this pottery display great attention to detail and fine craftsmanship. The vessel above is a 5 gallon hand turned salt glaze storage jar with the distinctive Ulrich/Wietfeld "dentate" capacity stamp. cc: 1850. - This vessel is on permanent loan to the Alton Museum of History and Art, by direct descendant, great granddaughter of John Wietfeld, Jacqueline Brashear.

This early form ovoid salt glazed 2 gallon jug is attributed to the College Avenue, Upper Alton, Madison County, Illinois pottery of half brothers Antone  Ulrich and John Wietfeld. This vessel features a short ridged spout, a ribbed strap handle, and the typical dentated capacity impressed stamping. Like other known Ulrich-Wietfeld vessels, the  precise diameter of the dentated circle is 2 cm, and the horizonal straight base of the impressed "2" is 1 cm. Likewise, the height, diagonal, and width dimensions match other known Type I dentate examples.

Noteworthy, is this vessel's stamped "2" appears to have had a depressed circular point at the tip (nose) of the "2," likely resulting from a clay filled blob area on the "2s" stamp.

Finding the capacity number commonly stamped off center and at varying positions within the circle, indicates that the actual capacity marking was a two separate step procedure: One step was applying the dentated circle (22 dots or dentates on all known 1, 2, 3, and 5 gallon vessels, and 20 dentates on all  4, and 6 gallon vessels).; and another to impress the capacity number.

Julius and Henry Wilhelms  and Company
The Wilhelms operation was  located in Bozzatown, now Alton proper, between Oak and Spring street, on the north side of Second Street (E. Broadway).  Julius, born  1828, and brother, Henry born 1833, came from Germany to Alton and established  a pottery in 1855.  Julius and his wife, Anna, daughters Matilda and Elizabeth, and brother Henry, lived nearby at 6th Street between  Oak and Walnut until 1874. Henry never married. Years later, they relocated their home to property immediately north of the alley immediately behind pottery and business shop, adjoining  ground owned by Dr. Koenig.  Koenig married Julius Wilhelms’ daughter, Matilda. Today, this elaborate Koenig house is home to the Alton Museum of History and Art.
The Wilhelms hand turned very distinctive wares that often featured finger/thumb welds on yellowware with brown spattered manganese decorations. No doubt their trade and skilled  craftsmanship was learned in Germany and much admired in Alton.  Upon arrival at Alton, Julius became involved civically with special interest and dedication to helping fellow German immigrants. He helped organize the Mutual Aid association which made the Wilhelms family  a much respected and contributing part  of Alton community for a quarter of a century.  Henry died in 1877 at age 44, and the pottery continued with only Julius and potter William Hack. Hack became a partner in the business and was listed as “proprietor” in the 1874 Alton City Directory. Julius Wilhelms died June 6, 1888, and the pottery soon closed.   Hack then joined another form of manufacturing as a glass blower at the nearby Illinois Glass Company. William Hack, the last of the J. Wilhelms & Company, died at age 67, in 1915. The earthenware produced by the pottery was easily damaged from rough handling and heavy use in the home, and once serving no further utilitarian purpose, vessels were soon discarded. In total, about a half dozen pipkins, pitchers and squat pitchers are known to have survived. One small Wilhelms pitcher was donated to the Alton Museum of History and Art by the granddaughter of Matilda (Wilhelms) Koenig, Corida Hanna.

George  Swettenham Pottery
An Upper Alton potter from 1850 to 1866, George Swettenham  was born in 1807 in England.  His wife Sara, eight children, and associate Charles Brown are listed within 1850 Upper Alton census and  in the 1866 Upper Alton city directory.  The pottery was located at northeast corner of Brown and Manning (now Washington Ave., pictured above). Swettenham manufactured variety of earthenware while employing seven men in 1860.  He also partnered  with the English American potters Charles Alcott and Charles Morley, while producing  mold made pieces of  Rockingham style/yellowware vessels.  These items included ornate table pitchers, meat jars with lids, preserve jars, and cuspidors, that possess his “ox-bow” mark. The inclusion of two names  indicates the joint venture.  The Swettenham pottery  is the only identified user of molds at Alton.
Swettenham’s use of molds was very cost effective for the pottery which  helped to position  the pottery in a more competitive posture against  competing local potters and  the mold made yellowware  manufacturers of Ohio. Molds and mold designs, such as the mold for the “hound handles” pitcher, originated in England and were brought to America, to East Liverpool, Ohio, and  to Upper Alton. All Swettenham’s ornate mold designs reflect a highly admirable clay ceramic  craftsmanship that equals the impressive mold designs of  Ohio potters. A strong English heritage is  exemplified in the work of George Swettenham, Charles Alcott and Charles Morley.  Several original molds of this landmark  Upper Alton  pottery have  survived and remain in the possession of a Swettenham descendant  in Madison County, Illinois.

Isaac E. Warnack was born in Pennsylvania in 1801. He emigrated from Knoxville, Knox County, Tennessee, where attempts to make  alkaline glazed stoneware began in the 1820s by neighboring farmers, Jacob Harmon and Jacob Lonas, on the Lonas tract. However, no absolute connection has surfaced between  the Warnacks, Harmons, and Lonas families and the shards recovered on the Lonas farm in Tennessee.  In 1832, Isaac Warnack settled in the village of Salu with his mother Elizabeth, and his brother Henry Warnack.  Indicated in the Madison County Record Book 26:165-166 is Warnack’s purchase of 34 acres where the pottery was established by 1843 north of Salu Street on west side of Seminary.  The census of 1850  lists:
Isaac  E.         49 yrs., Carpenter.
Frederick         25 yrs. Potter.
Thomas         13 yrs.
Susan          10 yrs.
George L.           9 yrs.
In 1850, residing at  the  Anthony Ulrich residence was Isaac E. Warnack’s son, twenty-one year old Henry D. Warnack.  Likely, Henry D. Warnack was a student and apprentice potter at the Ulrich- Wietfeld site and joined the Warnack pottery in about 1854. The Warnack pottery employed  five men in 1850. Their techniques of dipping salt glazed vessels, creating a distinctive two-tone effect, made a great impact on the Upper Alton pottery center and among competitors and employees that may have later utilized this technique in potting elsewhere in Upper Alton and at other nearby communities. Jacob Stizelberger lived in St. Louis and St. Charles, Missouri, in close proximity to Upper Alton, and settled in Belleville, St. Clair County. Three two-toned churns attributed to Jacob Stizelberger pottery bearing impressed stamp “Belleville, Ills” exist in private collections.  Another classic instance exists, whereby Joseph Bayer visited Upper Alton and returned to his pottery in Washington, Missouri, to produce two-toned slip cast  bowls.  Warnack advertised in the 1866 Gazetteer of  Madison County (Edwardsville, Ill:  Hair.XIX)   “Stoneware Factory of jugs, jars, churns, of every description constantly on hand”.  This advertisement  reflects an aggressive posture of  the I. E. Warnack & Son pottery in their competitive pottery center of Upper Alton.  A wide variety of distinctive salt glazed stoneware feature an Albany slip dipping application that created a two-toned, better sealed surface vessel. Also produced wares were either totally salt glazed or  totally Albany slipped. Few known vessels bear an impressed  “H.D. Warnack/ Upper Alton Ills” mark. and survive in private collections.  This pottery ceased production in 1868 with one remaining potting son, George.  Several Warnacks then moved to nearby Wood River.  Isaac had four sons:   Frederick C., Henry D., Thomas, and George L., and three daughters, Susan, Elizabeth, and Minevera.  In 1883, Isaac died in the town of Wood River and was buried  next to  his first wife, Nancy Warnack, in the Upper Alton Cemetery. .