ANDREW LOHR BOTTLING COMPANY
Andrew Lohr was born near Steinloh, Germany, in 1831,  and died in 1910 at  Cairo, Illinois. Having sold his dairy herd to purchased a recently closed soda factory from Edward Schroeder, he began The Andrew Lohr Bottling Company in 1861 in the small river town of Cairo, Illinois. Interestingly, a June 1860 business directory shows Mr. Lohr to be an employee of Mr. Schroeder. Both men were only 25 years old at the time of the sale and both spent the rest of their lives working in the soda business.  Mr. Schroeder relocated to East St. Louis, IL and became successful with two other soda factories. The successful Andrew Lohr Bottling Company’s leading soda brand was the White Star Soda Water, and in the late nineteenth century, The Andrew Lohr Bottling Company was also a regional distributor for Anheuser-Busch products including Budweiser. Around 1910, the Andrew Lohr Bottling Company  became the Coca Cola Bottling Company on Eighth Street.
Mr. Lohr utilized the convenient location of Cairo, situated on the Ohio and Mississippi Rivers to transport products in many directions. During the late Civil War, his supply was shipped to the soldiers fighting for both the North and South causes. Today, current bottle diggers often find his bottles in cities outside of Cairo, including New Orleans where he had a flourishing retail trade. He gained broad appeal quickly and his soda was a big hit!
In the mid to late 1800’s, soda manufacturing was typically a part-time business. Business slowed during winter months, yet the Andrew Lohr Bottling Company remained open year round. Andrew Lohr hired two employees as early as 1870 who were each paid $1,600 a year. In 1870, he produced 5,000 boxes of soda per year.  That equaled 120,000 individual bottles, quite a volume in that era. In the 1880’s, the business was advertised as having “a wide market to supply in Illinois and other surrounding states”. The earliest Lohr soda bottles were stoneware and made by Noah Aliff, a local potter in Mound City, Illinois.  Later, the Andrew Lohr Bottling Company produced their soda in glass bottles.
RE: Randy Huetsch, The Antique Advertising Expert, February 7, 2016: By Randy Huetsch Soda (https://www.antiqueadvertisingexpert.com).
​

Stoneware manufacturing at Mound City, Pulaski County, Illinois, prior to the commencement of the Civil War in 1860, included an interesting connection surrounding the pottery operations of Moses and Noah Aliff and Cornwall Kirkpatrick.

Beforehand, the Journal of The Senate of the Twenty-Sixth General Assembly of the State of Illinois (Springfield, Illinois Journal Printing Office, 1869) reported that "In the fall of 1853 Cornwall Kirkpatrick sold out and removed to Cincinnati, engaged in manufacturing ware in the Fulton pottery for the following four years, and served two terms in the city council from the Seventeenth ward. Next, Cornwall Kirkpatrick sold out at Cincinnati in December, 1857, and removed to Mound City, Illinois, where he established his Mound City Pottery. Unfortunately, on November 1st, 1859, due to the financial mismanagement of operating funds, Cornwall and Wallace Kirkpatrick removed to Anna, Union county, and built the Anna Pottery. (Bonham, Jeriah; Fifty Years' Recollections with Observations and reflections on Historical Events Giving Sketches of Eminent Citizens -- Their Lives and Public Service: Peoria, J. W. Franks & Sons, 1883).
Coupled with the great business logistics on the Ohio River, accessibility to a boom market,  forecasted golden business  opportunities, and the extensive deposit of pure clay at Grand Chain, a dream location for stoneware manufacturing was evident. Simply put, “the light yellow colored clay produces beautiful ware and the proprietor of a pottery works at Mound City was certain to succeeded in manufacturing a great variety of ware, and coating or lining each article with a uniform thickness of glass. The result or discovery is a very desirable ware, especially in fruit-jars, the leading article of the establishment."(Briggs, S. A.; Volume X.--1864 The Illinois Teacher: Peoria, N. C. Nason, 1864). Little Egypt was a haven for fruit growers in the southernmost Illinois region.
The Mound City Pottery was established by Cornwall Kirkpatrick in 1857.  In 1859 Kirkpatrick went to Anna and established a successful pottery business. By 1860, H. H. Hainer owned the pottery and attracted Moses Aliff from Westbrook, Maine (where Moses was a potter for at least 10 years at John T. Wilson's pottery).  By early July of 1860 Noah Aliff left Gardiner, Maine and joined Moses in Mound City (in Gardiner, Noah worked at Frank A. Plaisted's pottery).
In the 1850 Gardiner Maine Census, Noah Aliff is listed as a 17 year old laborer, born in Canada in the household of Robert & Jane Aliff (age 65 and 63), who were born in England.  In the 1850 Census, Moses Aliff is listed as a potter in Westbrook, Maine, and resided one dwelling away from John T. Winslow, a manufacturer of stoneware.  Moses Aliff is listed as a potter in the 1858 Portland Directory at Westbrook Point, Main,  and John T. Wilson was listed as a stoneware manufacturer. Noah Aliff is listed in the June 1860 Gardiner, Maine Census as a 26 year old potter born in Canada.    Moses is listed as 32 year old potter in Mound City 1860 Census and Noah, aged 29, was listed in the household as a potter as well. H. H. Hainer was listed as owning a pottery in the 1860 Mound City Census. Examples of potters clay from M. & N. Aliff of Mound City were exhibited at the Paris Expo of 1867.  The 1870 Pulaski County, Illinois Census lists Noah Aliff as a 37 year old stoneware manufacturer born in Maine.
Noteworthy, about 1865, a Mr. Charles Koch operated the Mound City pottery and by 1866 this firm was known as "M. & N. Aliff / Manufacturers / Mound City, Ills."  By 1870, Noah was listed as operating the stoneware factory in Mound City, and was living with Moses' wife.  Moses was not listed.  In 1880, Noah, age 42, and two nephews, James, age 19, and Albert, age 14, were listed as potters, not manufacturers, in Pulaski Precinct.   (www.sodasandbeers.com/SABBottleManufBeerSoda.htm).
​ 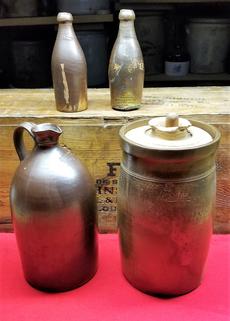 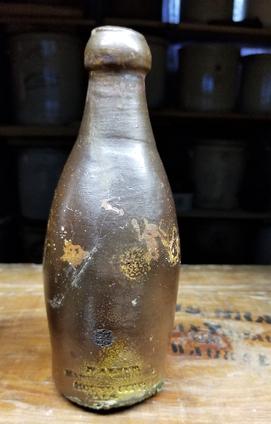