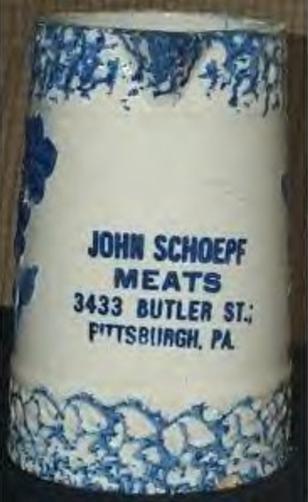 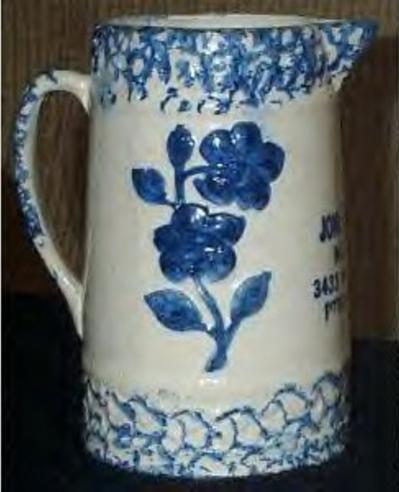 ​                                   Butterfly Salt Crocks
by Steve & Karen Stone
The Butterfly line was manufactured by the Nelson McCoy Sanitary and Stoneware Company (established 1910), Roseville, Ohio, and the Crooksville Pottery Company (established 1902)., Crooksville, Ohio, from about the mid 1920s to perhaps the mid or late 1930s. Five Butterfly lines known; a large pitcher, a smaller creamer, a butter crock (two styles and four sizes), a salt crock (two styles, one size), and a spittoon. Four of the five lines were solely intended for kitchen or dining room use, the spittoon could be placed as necessity dictated. McCoy wholesaled many of its utilitarian wares, including Butterfly, to other distributors which is why Butterfly pieces are sometimes illustrated and offered for sale by other potteries.
The salt crock variety most frequently seen has an orange peel surface texture with embossed butterflies encircling the crock, the stoneware lid also has the orange peel texture with more butterflies on the lid, the stoneware lid finial is a Turk’s Hat design. Depending on buyer’s preference, stoneware or hinged (hinges can be either brass or leather) wooden lids with screwed on porcelain finial were factory offered. The word “SALT” is embossed on the front of the crock, sometimes it would be painted blue and sometimes it would be simply glazed over and left unpainted. We have seen Butterfly salt crocks where the butterflies on the crock and the lid are painted blue as well as the word “SALT.” Very striking!
The other Butterfly salt crock is infrequently encountered. Both the crock and stoneware lid surfaces are smooth and do not present an orange peel surface; the theme of butterflies decorating the surfaces of the crock and lid are carried thru on this smooth surfaced version. The finial is a simple straight knob. The word “SALT” is featured as an embossed arch across the crock’s front.

In April of 1910 The Nelson McCoy Sanitary Stoneware Company, located in Roseville, Ohio, was formed by Nelson McCoy and his father J. W. McCoy. They began to manufacture and sell functional and decorative stoneware. They also mined, bought and sold clay. This part of their business provided clay to many of the area potteries for several years. In May of 1910 they contracted for the construction of a building and purchased the equipment necessary to produce the products in large quantity. They selected the Roseville area because of the availability of clay and the land that the city donated free of cost.

By 1925, after 15 years the Nelson McCoy Sr. family divested itself of interest in other pottery companies mentioned above and began to expand the Nelson McCoy Sanitary Stoneware Company. This expansion was to be both in products manufactured and larger facilities and more modern equipment. A new kiln was to be installed. This kiln was a tunnel kiln over 300 feet long and was the first of its kind in the area. This increased their production capabilities considerably and allowed them to produce not only the functional stoneware products but they were able to expand into the specialty art pottery products for the more affluent population. Such items as the Jardinieres and their Pedestals. The Umbrella Stands, Vases and other decorative products began to command more of their efforts. The functional became more decorative and the artistic requirements of the potteries increased. The Nelson McCoy staff included Designers and Artisans and began a new era for the Company as well as the industry.

During the late 20's and into the 30's the Pottery produced products that were fired with blended glazes and the designs were predominately dominated by, leaf and berry motifs. These glazes were earthy tones of brown and green. Many glazes were limited to the green and were more common and less expensive. They made these in mass throughout the 30's, reproducing the same successful designs which were functional which had an appeal to the public because they were inexpensive, attractive and every day usage pieces. The Depression was tough on the Potteries of the area and in order to survive they formed a co-op called American Clay Products Company which had one marketing or merchandising program. Each pottery produced its wares and they were included in one marketing and sales program which was offered to the buyers through the same salesmen. This may account for the close similarities of the products offered and the designs. Items of this era are hard to distinguish as to the manufacturer except to the knowledgeable collector who can recognize who made what. A few of the pottery manufactures who banded together and formed this association where:

This cooperative effort eventually lead to the demise of the Association and of course the desire to sell more product then the competitor ended the joint marketing efforts shortly after it began.

The McCoy pottery products changed as the Head Designer changed. During the early period the look of the leaves and berries was the work of the designer Walter Bauer. Mr. Bauer's designs were always the same theme with the berries and leaves and the leaves and the berries the only variance was the shape or function of the piece. Then, in the mid 30's an English immigrant Mr. Sydney Cope joined the company and by 1936 was the Lead Designer for the Pottery. While there were other designers employed by the company, Mr. Cope shaped the future of the art pottery style that the Nelson McCoy Pottery is best known. Such familiar pieces as the series of planters produced: The Hunting Dog, The Wishing Well, the Village Blacksmith, Down by the Old Mill Stream. While these were functional pieces they were also works of art too.
A lot of changes went on in the 30's at the company, including the change in the name of the company to better suit the times. The new company, "The Nelson McCoy Pottery Company", shed the old image of the producer of crocks and jugs and ushered in the new techniques, designs and products that predominated through the 1940's. New circular kilns that were 50 feet in diameter provided a more efficient stacking and firing process. They were able to handle up to 5,000 pieces of artware in each and it only took 24 hours to process. The old labor intensive techniques were replaced with new technologies to improve the quality and yield during the mixing, molding, and firing process.

As the Company moved into the 40's so did the nation move into the war. World War II proved to be yet another change in the operation and the products that the Nelson McCoy Pottery Company would produce. The Nation's War effort was moving industry into manufacture of War materials. And since land mines were made of clay rather than metal so they would not be detectable with metal detectors, the McCoy company was given a contract to full fill for the U.S. and its allies. This meant that the pottery had an allotment of clay to use for the manufacture of the mines and what ever was left over they could use to make their own products. They developed and produced a line of dinnerware and other related items. Once again they were functional items rather than decorative. Yet the items still had a degree of creative content.

The country and the McCoy Pottery Company survived the war. McCoy continued to produce both functional and decorative art pottery. From the mid 40's and into the 50's and 60's the company produced a line of cookie jars, which today predominates in the interest of the collector of McCoy. Throughout its almost 100 years of existence the McCoy family maintained ownership of the company and the president of the company was a McCoy through 4 generations. The company continued to grow as the economy grew and was considered to be the premise manufacture of art pottery in the U.S. At the zenith of the company's existence the employment had grown to over 450, many of which were sons and daughters, sisters and brothers of the artisan who passed the trade on to their families. Even surviving a major fire in 1950, which destroyed the pottery, the plant was rebuilt and expanded several times and grew to over 200,000 sq. ft. and was able to produce on average a 50,000 pieces a day. In 1967 yet another change came to the McCoy Pottery. The company was sold to The Mount Clemens Pottery Company and again in 1974 was sold to The Lancaster Colony Corporation. While the pottery maintained its creativity it was facing ever increasing competition from "Off Shore" products that was making it difficult to make a profit and continue to grow. The quality of the product was excellent in comparison, but the public was looking at a less expensive alternative to the U.S. made product.

In 1990 the McCoy Pottery ceased operation after a number of declining years of sales and profit. While it is sad that a Century of existence ended for the company, it lives on through the many collectors and individuals that appreciate the art form known as "Art Pottery".