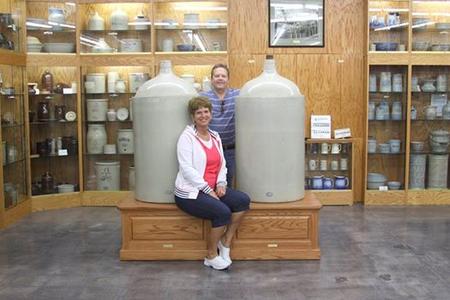 The land around Red Wing was rich with clay. In 1861 a German immigrant named John Paul discovered a rich pocket of clay on the land that he intended to farm. A potter by trade, he used this clay to make the first Red Wing stoneware. After Paul came Philleo Pottery, established in the heart of Red Wing in 1868, followed by the Hallem Pottery. Both went out of business – the former destroyed by fire, the latter by the drastic price cutting of established eastern competitors. It was in 1877 that the Red Wing Stoneware Company, forerunner of today’s famous Red Wing Stoneware and Pottery, was established.

The company supplied farmers with stoneware crocks and jugs for food and beverage storage. As our young country grew and the Industrial Revolution took people off the farms and brought them together in towns and cities, health concerns prompted the development of sewer systems. The Red Wing Sewer Pipe Company met the great need for ceramic sewer pipes. Two other companies were formed just before the turn of the century, Northstar Stoneware and Minnesota Stoneware.

By 1906 one company had gone out of business and the other three companies combined as the Red Wing Union Stoneware Company. With changing times, and especially the invention of the refrigerator, the old stoneware crocks and jugs were no longer needed. In 1913 the first refrigerators were invented for home use, although the cost was out of the reach of most people. At this point, Red Wing Union Stoneware Company began producing flower pots and vases, then luncheon and dinnerware, and a wide variety of art pottery. In 1936 the name was changed to
Red Wing Potteries. Artistic hand painting was added to the popular solid colors in a colorful variety of beautiful patterns and designs.