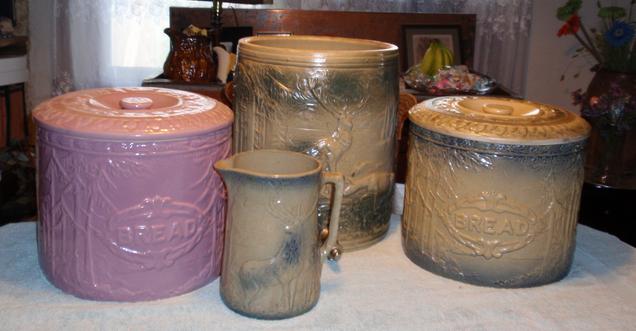 A man named Fiske discovered, in Springfield township, a bed of clay suitable for making stoneware. Fiske, who was a hired hand on the farm of a man named Cutchel, promptly bought the four-acre clearing where he had made the find and began manufacturing crocks and pans. About 1828 his first apparatus was a crude "kick wheel." The products of this primitive machine were sorely needed. What household and dairy equipment the pioneer had then  had been brought, at a considerable expense of money or  effort, from New England. No cabin had more than a  few such utensils. There was an immediate demand for  those which Fiske manufactured. He took a helper, a man named Smith, and built another wheel for him. The  two together set up the firm of Fiske and Smith, the first clay products company in what was to become Summit County. Two years later business was so good that they were  able to hire a boy named Edwin H. Merrill, whose name was  to loom as the real founder of the industry which made Akron the center of the clay products trade in America.

Edwin H. Merrill had learned the trade from his  father, Abijah. Another son of Abijah Merrill, Calvin J., was also an adept at the trade and soon followed Edwin  to Springfield, to be followed at a later date by the father  himself. They worked for Fiske and for another potter,  Solomon Purdy, who had entered the business in the meantime. In 1835, Edwin Merrill bought out his former em­ployer, Fiske. His first factory had a few crude wheels.  It was housed in a shed, and its kiln was an up-draft,  wood-burning affair. The father and brother worked with him. This enterprise branched beyond the house­hold utensil trade soon after it was organized. Edwin  Merrill invented a machine for making clay smoking  pipes, and soon the manufacture of stoneware beer and ink bottles was added to the activities. In 1847 the Merrill pottery  moved to that village and established, on Bank Street, its first real plant.  This made Middlebury a clay products village. Two years after the Merrill pottery began business on Bank Street. David E. Hill, Col. Reuben McMillen and Robert  Foster organized the Hill, Foster & Co. potteries and two  years later the Merrills and Hezekiah Camp took Foster's place in the firm, and it became Hill, Merrill & Co.

It had become apparent that the clay which was found  in and around Akron was excellently adapted for the manufacture of sewer pipe.  David Hill and C. J. Merrill interested themselves pri­marily in the evolution of machinery for producing a more practical pipe by a less devious process.  Here the clay products industry goes off into two  branches. Originally established to produce stoneware utensils for use in the early homes and on the early farms,  it now began to devote a great deal of its activities to­ward the manufacture of sewer pipe. In 1856, five years after the formation of the firm of  Hill, Merrill and Co., the firm of Whitmore, Robinson & Co. was established to manufacture a wide variety of  pottery. In these two companies, through the many  changes that were made, were the roots of the two out­standing clay products companies of today—the Robinson  Clay Products Co. and the American Vitrified Prod­ucts Co.

In 1871, Frank Adams and David L. King organized  the Akron Sewer Pipe Co. David E. Hill and his son, George R.; James Viall, L. S. Ebright and John Har­rison later joined this company. Two years afterward,  David E. and George R. Hill, and James Viall organized  the Hill Sewer Pipe Co. Viall had been a boatman on the Pennsylvania & Ohio canal and had hauled the clay  products before he entered the business of their manufac­ture. In 1868, the same year that the Hill and Adams Sewer  Pipe Co. was incorporated, the Buckeye Sewer Pipe works  were built near one of the biggest clay pits in the city,  in the vicinity of Exchange and Arlington sts. Joseph H. Baldwin, Jonathan H. Brewster and Harry H. Gibbs were prominent in this company. In 1879 Robinson Bros. & Co. built one of the largest  plants in the Old Forge. Prominent in the history of this  company are the names of Henry Robinson, Byron W.  Robinson, Thomas Robinson, William Robinson, James B. Manton and J. F. Townsend.  The Summit Sewer Pipe Co. was established in 1889  with a big plant on Miami st. in South Akron. J. A.  Baldwin and J. H. Brewster were joined by Edwin H. Gibbs and George T. Whitmore in this firm.

In the late eighties, the American Sewer Pipe Co. was incorporated by the five main companies then existing.  Members of each company were on the board of directors.  This association and its purposes were reminiscent of one  which had been formed in the infancy of the industry  fifty years before, portioning out exclusive territories to  each of the allied firms and establishing an agreement on  prices. The association formed in the eighties had for  its principal purpose the regulation of sales according to  the capacities of plants and the establishment of protection against manufacturers of inferior wares. In 1901, the  actual contract of the earlier association was found among  the papers of E. H. Merrill, then deceased. He and his brother were among the twelve signers.

Mention must be made of the firm which was established in the early fifties by Enoch Rawley and Edwin  and Herbert Baker, which manufactured Rockingham  and Yellow ware in Middlebury. This firm early in its  history became a part of the Whitmore-Robinson concern.

Arthur J. Weeks manufactured Akron Stoneware at  Arlington and East Market sts. for many years. L. K.  Force and Russell H. Kent had a similar factory on Bank  st. John Cook and William Fairbanks were also in busi­ness on Arlington st. The Akron Queensware Co. made queensware pottery at the intersection of Hart st. and  the Valley Railroad. Members of this company were  Charles C. Bates, Frank C. Tinker, T. B. Coxton and Mandus M. Hunsicker. The stoneware men formed an association similar to  that which was formed by the sewer pipe companies in  the eighties, and a little in advance of it. The Akron  Stoneware Agency was the name of this federation. In the association were James M. Wills, Henry S. Belden,  Russell H. Kent, Arthur J. Weeks and William Fair­banks.

Stoneware and sewer pipes are not the only clay prod­ucts which Akron has evolved. One Akron firm made roofing tile here for a time and furnished tile for many important buildings in the United States. Joseph C. Ewart operated the Roofing Tile Works on Brook st. after its founding in 1875. In 1900 the clay products business shifted around to­ward a more solid and substantial form of organization.  Whitmore, Robinson and Co. merged with the E. H.  Merrill Co. as the Robinson, Merrill Co. Two years later  this was changed to the Robinson Clay Product Co. The  American Sewer Pipe Co. had meantime absorbed a great many of the smaller plants. These two companies became the principal clay manufactories.

The clay products industry today is radically different  than it was at its inception in Summit county. The de­mands in the early days were simple; the pioneers wanted  plain, simple utensils, and that was largely the extent of the industry

As the cities grew, sanitation became a problem, and  Akron, with its veins of clay peculiarly adapted to sewer  pipe use, turned to supply this demand. Many of the old  pottery companies converted their plants to this branch  of the work. In the meantime, Akron had ceased being  a pioneer city. There was a demand for finer table ware. A few of the stoneware companies continued making their particular products and some modified their product to suit the growing demands for better grades of ware, im­porting finer grades of clay for the purpose. Of these,  the Summit China Company, formerly the Akron Stone­ware Company located on Bank st. now makes "high  dinner-ware" and does a large yearly business. Many of  the factories which had been located at their clay pits  closed when the veins were exhausted, especially the sewer  pipe factories. It was impossible to pay for shipment of  great quantities of raw clay while a competitor sat on top of his own supply.

As has been related, the Robinson Clay Product Com­pany and the American Vitrified Products Company, successor to the American Sewer Pipe Co., rose to a domi­nation of the sewer pipe field in the early years of this  century. The Robinson firm is headed by Henry B.  Manton, son of James B. Manton, one of the founders of the firm in 1856. It has eight plants in Ohio and western Pennsylvania. The twelve chief clay products companies now op­erating in and about Akron are the Robinson Clay  Product Company, American Vitrified Products Com­pany, United States Stoneware Company, Summit  China Company, M. A. Knight Company, Camp Brothers Company, L. W. Camp Company, Crouse  Clay Products Company, Ohio Insulator Company,  Colonial Insulator Company, Mogadore Insulator Company and Windsor Brick Company.