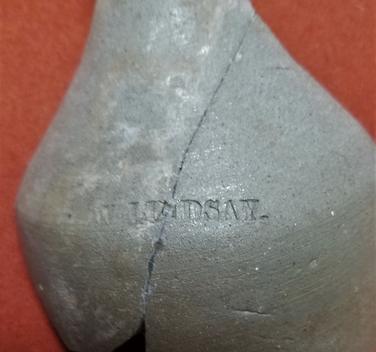 More about the kilns of
CHARLES KOCH 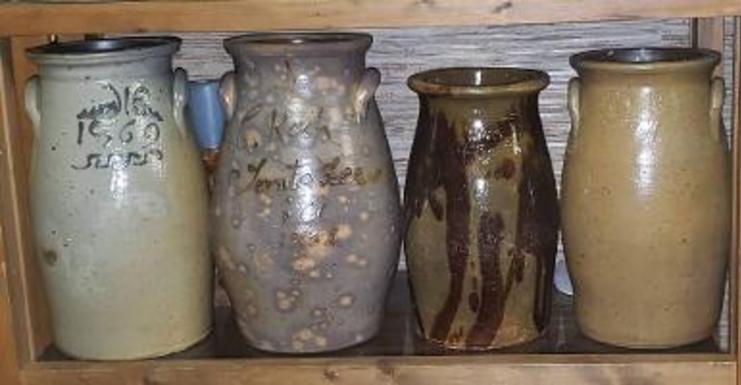 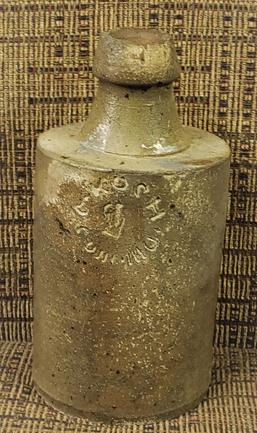 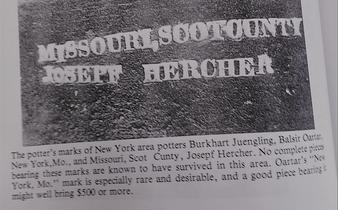 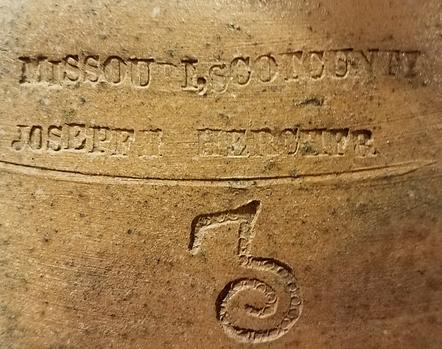 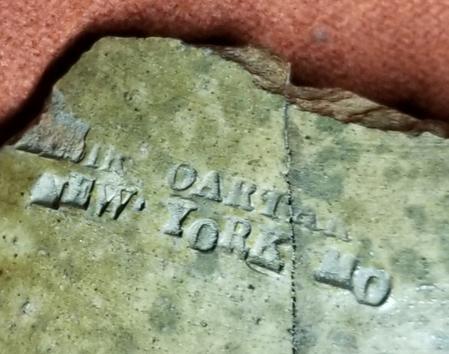 High quality pottery clays of Washington County, Missouri,  attracted the attention of Frederick Woolford who held much interest in geology and industrial development. In about 1839 the young Englishman located near Caledonia. Missouri, and established a pottery for manufacturing stoneware. As reported in the Missouri Republican, January 14, 1840, “Washington Stone Ware Manufactory.  The subscriber located himself near Caledonia, for the purpose of making stone ware, where he will keep a general assortment, on hand, and be prepared to fill orders at all times with dispatch. Merchants and others will find it for their advantage to call and examine his stock, before purchasing, as he is satisfied he can furnish them a cheaper and better article than can be produced elsewhere. ‘Several good Journeymen at the above business will find constant employment at this factory on satisfactory terms.....F. Woolford.”

In about 1848, Elihu H. Shepard of St. Louis informed Woolford of kaolin clay deposits found on government land in Washington County that Shepard  owned. On July 5, 1850 Shepard acted to develop a queensware pottery on this kaolin tract and in early January, 1852, completed  an elaborate pottery factory that employed twenty one Englishmen, imported machinery, and built houses for the workers. With great despair, due to carelessness, the initial firing of the kilns resulting in the burning of the main eighty foot front building that bankrupted the effort and  Woolford was discharged for mismanagement. Shepard could not find a capable replacement for Woolford  to  manage  the English potters  and decided  to  lease the pottery the next two years. After about six years this project lost of $10,000, and Shepard closed the factory (The Autobiography of Elihu H. Shepard. St. Louis, 1869, p. 187).

Despite this failed venture, both Shepard and Woolford  held much in common, even aside the ceramics industry.  Both supported the Union in the Civil War and opposed the Missouri Confederate  Bushwhackers, bringing Shepard to serve in his third war and likely taking Frederick Woolford to Bollinger County, Missouri. Here, Woolford  continued his support for the Union and eventually resumed potting interests.
In the mid 1860’s, fourteen miles southwest of Perryville, he produced regular stoneware off White Water Creek at Bristol, Bollinger  County, Missouri.  Noteworthy is that formerly this Bristol area was referred to as “Jugtown” and that Bristol is  today a mere ghost town that existed within  the area  called Alliance, Missouri, a few miles east of Patton (Junction), Missouri. Today, Alliance is an unincorporated community in the northwestern part of Whitewater Township in Bollinger County, Missouri. All  that remains today are remnants of the original kilns viewable from a remote gravel road. Indeed, Woolford was a skilled master potter.

​    New York, Missouri, was a small settlement or boat landing in the northern part of Commerce Township just north of the town of Commerce on the Mississippi River, about a half mile below the modern village of Thebes, Illinois. It was settled by Germans who came from New York City and was named for the Eastern City. The town caved into the river gradually after 1873. (Campbell, Moore, Harrison) Source: Hamlett, Mayme L. "Place Names Of Six Southeast Counties Of Missouri." M.A. thesis., University of Missouri-Columbia, 1938.

Edison Schrum's personal site excavations and research revealed that New York was a stoneware manufacturing center from 1835 to 1879.  Most credit Mr. Schrum with the discovery of the New York potteries and their locations.  In his writing, "COMMERCE, MO. 200 Years of History," Edison Shrum details that he received a stoneware bottle that had been dug in St. Louis, Mo., and notes that "it had been made by Balthaser Oartar at the old New York, Mo., pottery." and  that "It bore the name of Smith & Fortheringham, a bottling firm in St. Louis, yet it was exactly like, as to material and shape, as those similarly labeled that I had found at New York." (Ibid., page 124). Four variations of these stoneware bottles exist in private collections. (One unique example is reported to have been dug in St. Louis, Missouri, by the late collector Gene Kelly, that includes the initials "R.B.," possibly indicating root beer contents.

Smith & Fortheringham was a Soda and Beer Company located at 114 Washington Ave, St. Louis, Missouri, in the late 1840s. 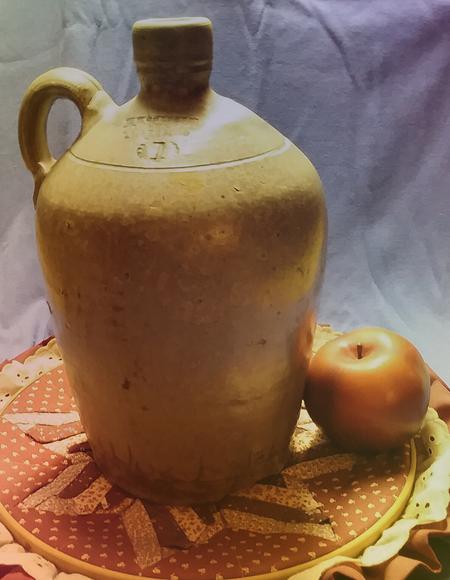 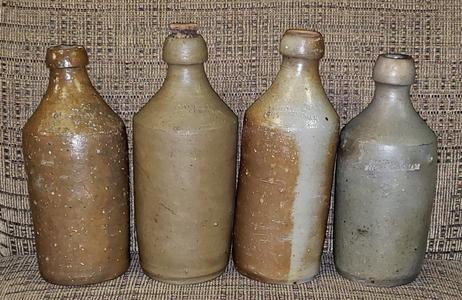 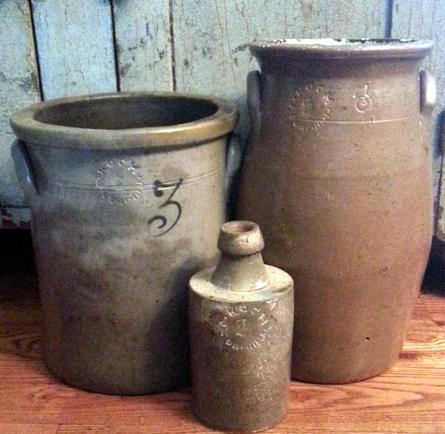 Sample of scarce ware produced around

One hundred thirty miles south of St. Louis, Missouri, on the Mississippi River is the historic settlement of Commerce, Missouri. Directly across the Mississippi River from Commerce was established the town site of McElmurry's Station that was built prior to 1783 by John McElmurry and the Flannery family. Logistically located near Commerce and the Mississippi River, the settlement soon became known as Commerce Landing, Illinois. This southeast quarter of Section 34, Township 15 south, Range 3 west, of Alexander County, Illinois, was of the earliest settlements in Alexander County. By an act of March 26, 1804, the land office at Kaskaskia validated the claims of John McElmurry, Joseph Standlee, and of Abraham, Joshua and Thomas Flannary to the Spanish French Surveys of this ground and their land claims were legally registered. (History Of Alexander, Union And Pulaski Counties, Illinois, William Henry Perrin, 1883, Chicago: O. L. Baskin & Co.). Commerce Landing officially became named Santa Fe, Illinois. The first post office was established at Santa Fe in 1838. In July of 1906, the Miami Powder Company requested that the town name of Santa Fe be changed to honor A. O. Fay, the owner of the important Miami Powder Company that had died that year. Thus, the old town of Santa Fe in Alexander County became known as Fayville.