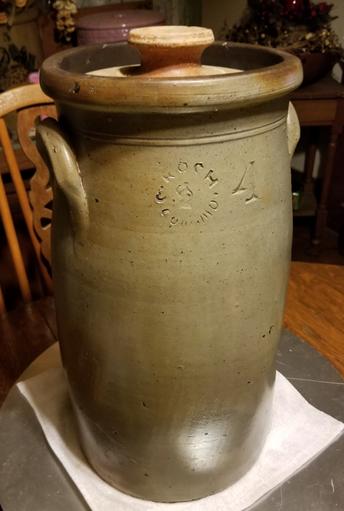 Charles Heinrich Christian Koch was born Dec 12, 1828 in Lippe,  a principality of Germany. By the 1850s, he likely potted as a lessee of the Sieckman pottery that was located at Santa Fe (formerly called Commerce Crossing), Alexander County, Illinois. At that time, the Sieckman operation was the only pottery established at Santa Fe and was actually located just north of Santa Fe. (Schrum, Edison, "COMMERCE MO. Two Hundred Years of History;" p. 126; 1996). No known marked vessels are known from the Sieckman operation. One cobalt decorated vessel if known signed and dated in cobalt script “C. Koch / Santa Fe / 1862”  with the reverse side bearing an encircled “ C. Koch / Santa Fe, Il.” impressed stamping. Vessels of the Santa Fe region bearing cobalt freehand decorations and dates are highly scarce.
Charles Koch is listed in Illinois State  and County Manufacturing Records as “pottery” in Mound City, Pulaski County, Illinois, in 1866. No known Mound City marked “C. Koch” vessels are known. (Mounce, Eva; "Checklist of Illinois Potters and Potteries," p 20; 1989).

The late renown Commerce historian Edison Schrum details that “George Albrecht, father-in-law of Charles Koch, died in 1866, and his daughter, Louisa, inherited at least part of his farm. Koch apparently established his pottery on this property (SW ¼ of SW ¼ of fractional Section 12, Township 29N, Range 14E), which was located about two miles NNW of Commerce. During the years 1868 1nd 1869, and possibly other years, Koch dates some of his pieces and I have picked up a number of potsherds bearing these dates.”  (Schrum, Edison, "COMMERCE MO. Two Hundred Years of History;" p. 126; 1996). Further, Scrum writes “Koch was a master potter. His art ware featured color and the finest glazes I have ever seen. Unfortunately, most of his best work was exported to other regions along the Mississippi. In fact, I know of only two intact pieces in this area (Commerce), and one of them is far from being among his best, judging from the sherds I have found at the Albrecht farm site.” (Schrum, Edison, "COMMERCE MO. Two Hundred Years of History;" p. 126; 1996). Very uncommon are vessels that are marked with an encircled “ C. Koch / Com. Ill.” impressed stamping, featuring a small impressed jug at center of circle.

The Kilns and Stoneware of Charles Koch 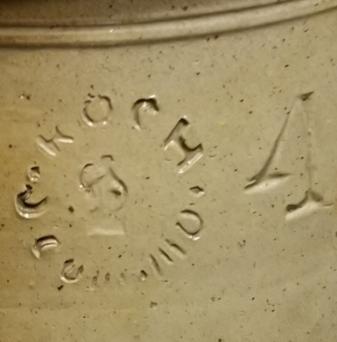 The connection to the Kirkpatrick and Aliff 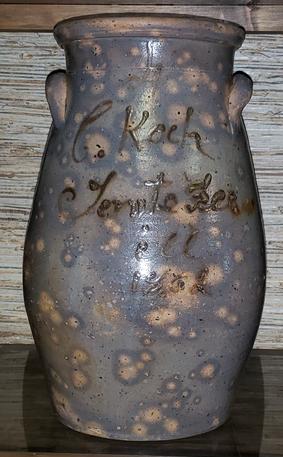 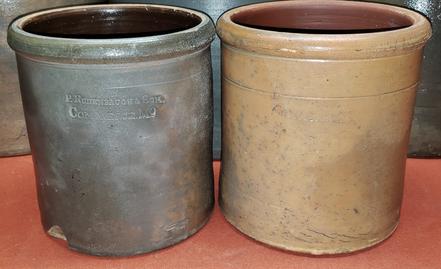